Greg Sargent, “The damage done by Joe Manchin is likely to get much worse,” Washington Post, December 10, 2021, https://www.washingtonpost.com/opinions/2021/12/10/manchin-filibuster-protecting-our-democracy-act/

I guess my thinking on the proposed merger of Wilkinsburg into Pittsburgh[1] is that 1) there is absolutely no doubt that Wilkinsburg needs help, but 2) I’m just really not at all sure that Pittsburgh is the entity to provide that help.

There’s a street I think of as I think about this: On Pittsburgh’s side of the boundary, it’s Oakwood Street. It’s not a wealthy street in a wealthy neighborhood by any means. There’s some blight. But as you drive down this street, and you cross into Wilkinsburg, it becomes Wood Street and there is significantly more blight.

This isn’t a question of Wilkinsburg dragging down Pittsburgh; Wilkinsburg is much too small relative to Pittsburgh to do that. But Pittsburgh is moving much too slowly to address its own issues and, frankly, there are pieces of Pittsburgh that look every bit as bad as Wood Street in Wilkinsburg.

What white Pittsburgh must understand is that black Pittsburgh had to riot before a sense of urgency about ghetto problems was generated in the white community.[2]

The sense of urgency, to the extent it ever existed following the Hill District riots in reaction to the Martin Luther King, Jr., assassination in 1968, has long since been lost,[3] as exemplified by Bill Peduto, the outgoing mayor of Pittsburgh. I don’t know what the answer is for racial justice, blight, and poverty in either municipality. But I think I’d find the case for a merger much more compelling if I saw such an answer.

My mom sent this to me. It looks like a smoking gun.

The odd thing isn’t just that steel was celebrated in Pittsburgh the way it was, here illustrated with steel mill smokestacks belching out pollution, but that it still is celebrated this way. 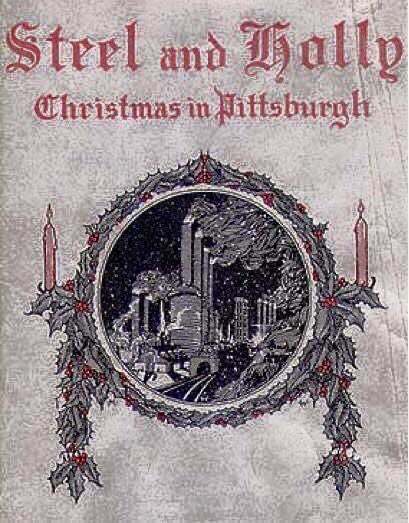 
This continues to be so, despite capitalism’s betrayal of the Pittsburgh region, with the closing of the mills that culminated in the years of 1979 through 1987.[4] It supports a culture of toxic masculinity[5] that forms a significant part of my childhood trauma,[6] a couple of years of which occurred right here in Pittsburgh’s suburb of Mount Lebanon, and that I relive every time I drive by Lincoln Elementary School on Beverly Road at Ralston Place, and that a Donald Trump victory in 2024[7] could once again unleash on Pittsburgh streets.

I am beginning an investigation of Erie, a city whose population base is smaller than I’m comfortable with for Uber/Lyft driving, in part because Erie seems to take much better care of its roads, which would reduce the threat to my own vehicle; in part because I actually might be able to afford the down payment on a house there; in part because Erie County falls within Colin Woodard’s Yankeedom sociocultural region,[8] the region I think most tolerable; in part because of Presque Isle State Park; in part because it’s hopefully away from the kookiness of Pittsburgh, a kookiness with a hard and dangerous right-wing Trumpian edge where even non-supporters of Trump espouse the conspiracy theories they likely find on Facebook.[9] My great fear is that Erie won’t have the population to support me especially in the winter months—the slowest of the year—and so I plan to take daylong trips up to Erie to see just how bad it is. It’ll be a reality check.

The tweet was retweeted by Bill Peduto, Pittsburgh’s outgoing mayor.

Empire is empire. I had hoped the story from New Caledonia[10] might be different.

And I guess it is. Instead of Russia forcibly seeking to annex Ukraine or China threatening force to reintegrate Taiwan, France is holding a referendum on independence timed, that is, rigged, to support the status quo.[11] Not quite the argument I’d want to be making when I’m pretending to be a “democracy.”[12]

Ashley Westerman, “New Caledonia might be about to break from France. Here’s why the world is watching,” National Public Radio, December 11, 2021, https://www.npr.org/2021/12/11/1063074122/new-caledonia-might-break-from-france-in-third-independence-referendum-on-sunday

One thought on “Is Pittsburgh the answer?”