I think at this point I’m mostly in “wake me when it’s over” mode on Ukraine. There is no argument I can offer that, even if heard, would change what happens on the ground at this point.

In truth, I’m watching the headlines, but really not trusting what I’m seeing on progress or lack thereof on progress of the invasion. Something to bear in mind is that Kyiv, the capital, is relatively and uncomfortably close to the border with Belarus (figure 1). If it falls, and this has yet to be seen, there is still a lot of the country left to conquer. 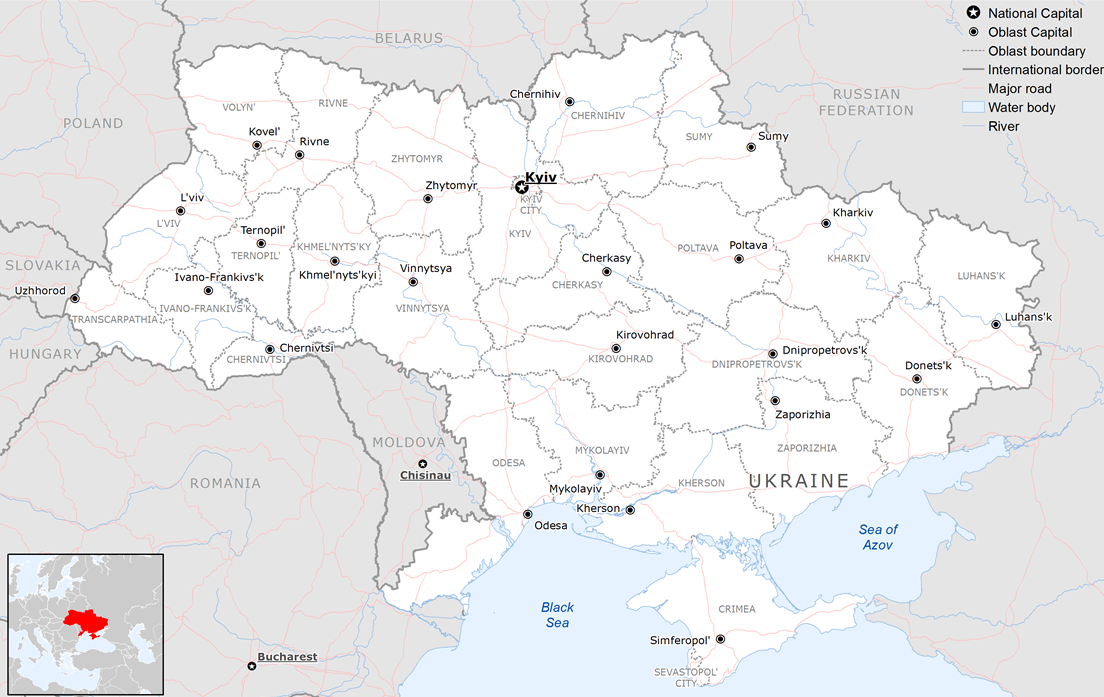 The story about Tucker Carlson and a few other Trumpists blaming anyone except Vladimir Putin for the Russian invasion of Ukraine[1] nearly coincides with a Twitter thread from George Monbiot,[2] which I reproduce below, who is talking about “tankies.”[3] Tankies see the U.S. and the North Atlantic Treaty Organization as the penultimate evil, the devil incarnate; in their binary view, this leads them to the inescapable conclusion that anyone who opposes these entities must therefore be deified or at least canonized as a saint. Any evidence or argument you might present in opposition is, for these people, “Western propaganda.”

I try not to engage with such assholes anymore; life is to short and arguing with them is futile. I am, in light of the invasion, aggressively blocking them. Here’s Monbiot:

For years I’ve been arguing with a faction within the “anti-imperialist” left, that is neither anti-imperialist nor distinguishable in its foreign policy positions from the far right. It is pro-Putin. It recycles Kremlin propaganda and whitewashes atrocities.
Thread/

I’ve been contesting its justifications of Vladimir Putin’s and Bashar al-Assad’s atrocities in Syria. Its attempts to justify Putin’s attacks on Ukraine are equally shameful.

In the approach to Putin’s invasion, this faction has blamed everyone but him. Its excuses for his imperialism happen to be identical to the Kremlin’s:
It’s all NATO’s fault
It’s about the Azov battalion
It’s about protecting Russians from Ukrainian aggression.

The people who have amplified these excuses are not, as they claim, anti-imperialists. They are rightly opposed to western imperialism, but will bend over backwards to accommodate Russian imperialism. Some are paid stooges. For others it’s “my enemy’s enemy is my friend.”

In Syria, echoing Russian propaganda, they have excused or denied some of the worst contemporary atrocities on Earth: Assad’s chemical weapons attacks, barrel bombing of civilians, mass imprisonment, torture and murder of those who resist.

In trying to counter this propaganda, I’ve found myself accused, bizarrely, of being a “warmonger”, an “imperialist” and a “US shill”. No, it’s about trying to apply consistent principles. About opposing the worse examples of inhumanity, regardless of the perpetrator.

(For the record, I was among the very few UK journalists to oppose the invasion of Afghanistan. I also set up the Arrest Blair campaign, to try to hold him to account for his criminal war in Iraq. Never mind, I must be a western shill and warmonger.)

Of course, I was not alone in calling out this appeasement. But we were few in number, while the pro-Putin faction has been noisy, highly visible and brimming with confidence and aggression. None of this has been any fun. But the propaganda had to be contested.

Now that Putin’s full-scale invasion has left them stranded, some of these people are mumbling “of course, we condemn all war.” But they haven’t and they don’t. For years they have carried water for Putin and other bloodthirsty tyrants, justifying their colonial aggressions.

I’m sorry to bring all this up again. It’s uncomfortable, in fact frankly pretty horrible to engage with. But we do no one – except Putin and his acolytes – any favours by pretending it isn’t happening.[4]

Of course, the likes of Carlson are hardly arguing in the same manner as tankies. Trumpists are about toxic masculinity[5]—the bare-chested Putin riding a horse or the photoshopped image of Donald Trump’s face on Rambo’s body, for example—and assess Joe Biden as “weak;” hence a way to blame Biden.[6]

It is, of course, all so asinine as to merit sarcasm, for which I promptly got myself in trouble in my Twitter replies. I can hardly blame those who missed it as I have failed similarly myself. Sarcasm is unwise and even reckless on Twitter, where a 280-character limit on posts imposes an easily misunderstood brevity. But my always limited—I remember this being a problem even in junior high school—and steadily decreasing tolerance for inanity seemingly compels it.

Anne Applebaum, “There Are No Chamberlains in This Story,” Atlantic, February 20, 2022, https://www.theatlantic.com/ideas/archive/2022/02/munich-security-conference-chamberlain/622872/

Adario Strange, “Kyiv or Kiev? How to pronounce the name of the capital city of Ukraine and why,” Quartz, February 24, 2022, https://qz.com/2133021/this-is-why-the-name-of-ukraines-capital-is-kyiv-not-kiev/

Much to my astonishment, Joe Biden is nominating a former public defender, Ketanji Brown Jackson, to the Supreme Court. “[H]er confirmation could be a jurisprudential break from a man [Biden] who repeatedly voted with law enforcement over individual rights.”[7] I thought sure this would go another way and I hope she will indeed be brilliant in her own way[8]—I very much fear she will need to be.

Irin Carmon, “The Other First: What it means to nominate a veteran public defender,” New York, February 25, 2022, https://nymag.com/intelligencer/2022/02/ketanji-brown-jacksons-public-defender-experience.html