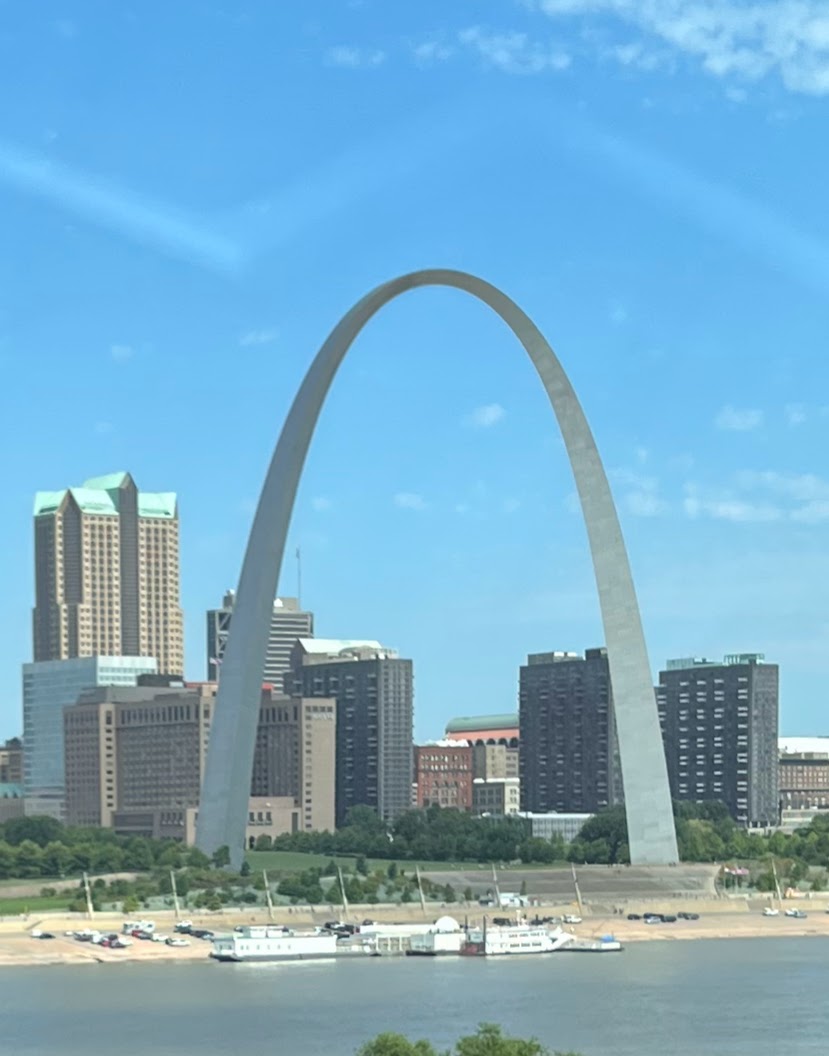 The photograph (figure 1) is the result of a wrong turn and a traffic jam. I got a lot closer to the Gateway Arch than I was supposed to, but not so close that this isn’t a rather tightly cropped shot. It really is huge.

Your clever Uranus jokes have nothing on those of the folks of Uranus, Missouri, yes, an actual town, where I saw a billboard for a fudge shop, yes, a billboard, declaring that “the world’s best fudge comes out of Uranus.” That wasn’t the only billboard, but it was probably the worst joke.

After a long drive through Missouri, I passed directly into the Indian nations of Oklahoma. Much to my surprise, I did not pass through Arkansas; Missouri, it turns out, has a short border iwth Oklahoma, and I crossed there. It was still a long drive to my hotel.

When I finally checked in in Irving, Texas, if I had any doubt I was in Texas, it was dispelled as I walked past the television in the hotel lobby on the way to my room. It was tuned to Fox News.

And it was playing an ad from Mike Huckabee touting a program to “teach” kids—yes, kids—about Donald Trump. Of course, the announcer referred to Trump not by his given name, but rather as “President Trump,” something only Trump’s admirers do, so it’s not like I had to chase down the website to see what this program would have to say.

Remember this when you hear conservatives complain about “liberals” indoctrinating kids.

The room was lovely, but the toilet lent support to Trump’s fury about toilets.[1] I can’t tell you if that was by design but the mini refrigerator’s freezer also failed to keep my frozen stuff frozen.

But at least I got a sound night’s sleep, in stark contrast to the Econo Lodge the night before, where I had not only the upstairs neighbor moving stuff around and walking heavily at three o’fucking clock in the fucking morning, but a fire alarm (false and brief) at around eight. I probably will not be booking EconoLodge in the future; the chain was okay in California, but I’ve had too much trouble with it elsewhere.

This room at the Cities of Gold Casino however, somewhere around Santa Fe, New Mexico, looks spectacular. But the walls are thin; I can hear my neighbors playing their television and sneezing. I may just be going too cheap with rooms.

While Attorney General Merrick Garland fiddles,[2] it appears the Atlanta area district attorney, Fani T. Willis, is putting together an actual case over, among other things,[3] Donald Trump’s call to the Georgia secretary of state beseeching him to “find 11,780 votes.”[4]