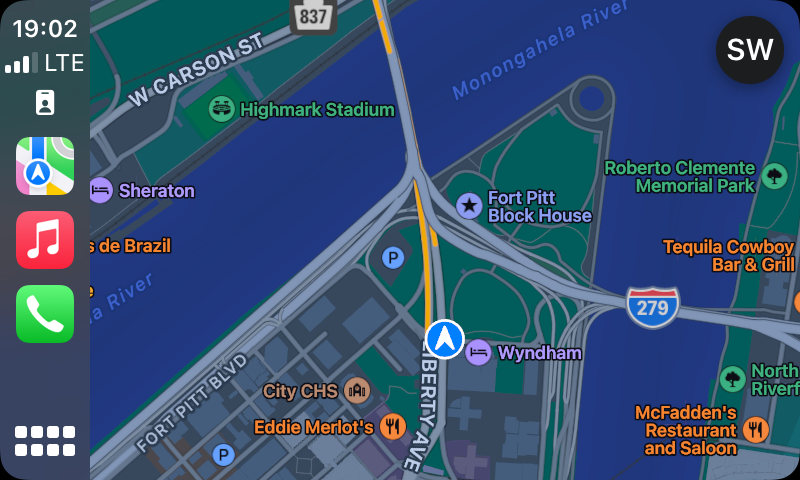 In developing these pages, I have relied on Google Maps. However, since switching to the iOS platform from Android, I’ve been irritated by Google Maps’ clunkiness, so I’ve been trying out Apple Maps. In this time, I went through an upgrade to iOS 16 and to WatchOS 9, which obsoleted some information, which I’m now deleting.

It turns out that, on the iOS platform, Google Maps is attempting to emulate Apple Maps. Most of the clunkiness, the repeatedly required additional button pushes that make me want to scream, “JUST DO IT, ALREADY!” can be seen in Apple Maps as well. A difference is that with Apple CarPlay, Apple Maps puts the clunkiness on the larger dashboard screen where it’s easier to see and deal with.

And why Google Maps would choose to imitate everything annoying about Apple Maps in its iOS version, without any of the Apple Maps features that ameliorate the aggravation, is a mystery.

One place this is particularly aggravating is when I end a trip before reaching the precise spot the mapping programs think is the end of the trip. Both Google Maps and Apple Maps will expect me to continue on to their unnecessarily precise destinations, and it’s yet two more button pushes to say, yes, I want to end the previous navigation before setting out on a new one, but with Apple Maps, it’s much easier to end a trip because this is much more easily accessible with at most a mere two button pushes on the dashboard screen rather than a seemingly endless number of pushes required to exit navigation on Google Maps.

On the whole, however, Apple Maps’ map data seems more accurate and its routing seems more sensible than Google Maps. I had previously suspected that Google Maps was attempting to calculate faster routes to a degree of precision not supported by its data[1] and this reinforces that sense. As an ex-programmer myself, my present feeling about Google is that they try too hard to accomplish certain ends, end up missing those ends because of it, and that this is an example of that. It’s a stupid kid error to be expected in an industry notorious for ageism.

And there are errors in Google Maps data that seem never to get corrected. When I briefly returned to Google Maps one afternoon, I almost immediately began encountering these.

I am starting to suspect that Apple Maps does a better job of keeping up with road closures. With an aging infrastructure, Pittsburgh has an insane number of closures, and it’s pretty clear to me that the authorities don’t give enough of a damn to inform mapping services of all the closures. This desperately needs to be a platform-neutral thing, with all mapping services getting timely and accurate closure information, so people can plan routes accordingly.

Both Apple Maps and Google Maps are weak in indicating an initial direction of travel. Google Maps will assume that I will continue in the same direction I was travelling in before, which may not be true when I’ve pulled into a driveway, done a U-turn, or otherwise done a turnabout; it seems much more resistant to the possibility that I might, whether by intent or by mistake, take off in a different direction than it anticipates; and it will exhaust every other possibility besides the one that I might simply have done a U-turn. If I’m not sure which way it meant for me to travel, this can very rapidly lead to further wrong turns, which in a place like Pittsburgh, can be extraordinarily costly.

Apple Maps often—not always—starts with the direction you ideally should travel in and seems a bit more nimble if you go in another direction.

I have not noticed that Apple Maps is any worse than Google Maps at avoiding traffic congestion.

One thing I do notice is that Apple Maps seems less determined to take me down roads that are in such poor condition that they ought to be closed. If there’s a pothole within fifty miles, Google Maps seemingly wants me to hit it, at least twice. I don’t think Apple Maps particularly avoids such roads, but whatever malicious madness exists within Google’s algorithm that actually prefers them is thankfully absent.

Finally, with Apple Maps, my Apple watch taps me on my wrist, both audibly and haptically, as I approach some turns. The tap is different based on whether a turn is to the right or the left and there is a chime when you are continuing straight. As near as I can tell, the decision to tap or not is based on speed; if I’m travelling fast enough that there’s any chance I might miss the turn, it will tap. If I’m travelling slow enough that I’m probably already trying to figure out where the turn is, as in a parking lot, it won’t. Because the taps happen so often, I’m not sure that, in the long run, this will actually help me to avoid missing turns, but it’s an interesting feature nonetheless.

All in all, at least for the moment, I am preferring Apple Maps. But I will keep Google Maps on the phone for offline maps: Mobile data coverage is by no means complete; Google Maps allows you to download maps and store them on your phone, which is the one thing I really miss with Apple Maps.