In general, local folks will know which roads should be avoided at all costs. Driving for Uber and Lyft, I’ve never had so many folks warn me off of routes that Google Maps recommends because of potholes.

The biggie near where I live is Century III Mall, which goes by a closed shopping mall.[1] Google Maps, naturally, loves it and thinks you should use this road in nearly every circumstance that it could in any way be appropriate. (In general, Google Maps often prefers roads that are nearly unusable.) Use it at the risk of your car’s suspension; it has so many potholes that, if they (whomever it is that is responsible for this thing) aren’t going to fix it properly, they should close it. Instead, every once in a while, somebody comes around and dumps some asphalt in some of the holes.

East Hills Drive between Frankstown Road and Park Hill Drive in the East Hills neighborhood (figure 1) has some of the worst potholes anywhere in Pittsburgh. I haven’t actually gotten out with a tape measure but some of these look to me like they are six inches deep or more. Apparently this roadway has been like this for decades. Unless you have a tank or a bulldozer, avoid this road at all costs. 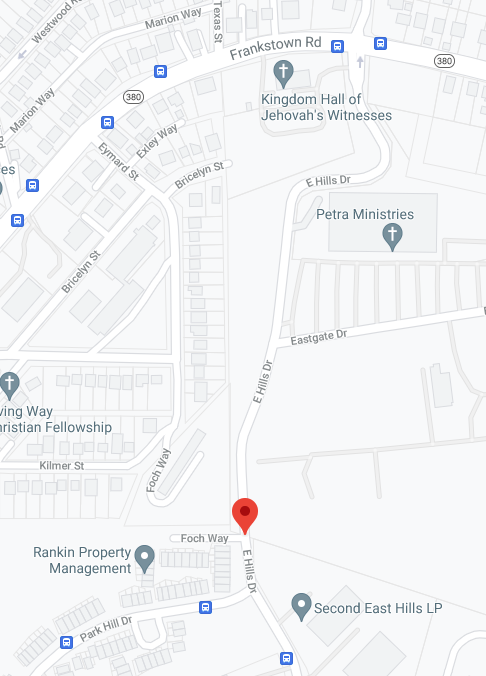 Cobblestone and brick streets have notoriously uneven surfaces. Some are effectively as bad as Century III Mall or even East Hills Drive. And any notion that they might be preserved for aesthetic reasons is dispelled when one encounters ugly asphalt patches that cover over some of the worst dips.

I have seen only one well-maintained brick street, specifically, Potomac Avenue in Dormont. The rest appear to be kept as brick and cobblestone because local authorities feel they can get away without taking care of them. And they can be brutal.

In California, they used shims—yes, such things exist and I’ve seen them—to keep utility hole covers even with the level of the pavement. In at least parts of Pennsylvania, including the Pittsburgh area, they just let the covers lie significantly below surface level, effectively creating potholes that are surely just as hard on your suspension as more naturally-created potholes.

Fig. 2. Screenshot from Google Maps, September 23, 2019. This covers the area around Rialto Street. There are few alternative routes to Troy Hill.

Another problem, harder to avoid, is Rialto Street (figure 2) which effectively connects the 31st Street Bridge over the Allegheny River from the Strip District to Troy Hill. It’s just about the only way to Troy Hill within a reasonable distance. This street is narrow, steep, and, yes, two way. Traffic can be heavy on it because it’s hard to avoid, and getting around that sport utility vehicle (SUV) going the other way is nerve-wracking. And there can be a lot of SUVs here; they’re popular here just like they are anywhere else.