Matt Simon, “How to Protect Species and Save the Planet—at Once,” Wired, June 10, 2021, https://www.wired.com/story/how-to-protect-species-and-save-the-planet-at-once/

This is damn near impossible. It’s like asking: “Can you briefly explain how the universe works?”

However, there are some things people should know.

Can you break CRT down in a thread pls?

First of all, you should know that critical theory, as a tool for examining social structures, has been around for more than a century.

And we know that when you examine or “critique” something, especially a society, the critique is NEVER objective. It is always colored by the perspective of the observer. I know this sounds like something someone says when the edible kicked in, but here’s an example.

Everyone knows America founded was founded on July 4, 1776. I don’t think there’s any debate about that.

1776 was just the year a bunch of white guys wrote a breakup letter to King George saying the American colonies were tired of being England’s sidepiece.

But that was on June 7, so America didn’t become a country then. The Declaration of Independence wasn’t even signed until August, after the Revolutionary War had been going on for over a year. And the war lasted until 1783. And the Constitution wasn’t ratified until June 21, 1788

How was America founded before we became an official country?

In fact, for years, Jefferson and Adams disagreed on the July 4 thing. In his papers, Adams told his wife it was July 2, 1776

Basically no one remembered.

And if you ask the indigenous people of North America when this country was founded, they’d tell you there were cities, states and organized governments long before white people arrived.

My point is: How we define “America” has always been determined by white people.

In fact, enslaved Black people were not technically “Americans” until the passage of the 14th Amendment, which defined citizenship.

If white people arbitrarily decided that America was founded in 1776, the only reason someone would argue with another date like… ummm…1619

is if they were not “critically” examining history. Does that make sense?

OK, here’s something else you should know:

Not ONE SCINTILLA of what I just said has anything to do with Critical Race Theory.

Basically, CRT was first used to examine and study the law through the lens of race. But “critical theory,” doesn’t just examine social structures, nor should it. If the smart, educated arson investigators showed up to examine a fire, wouldn’t you want them to try to put it out?

So CRT has a few premises.

2. Racism is “ordinary”: This is the part that people get wrong. Tucker Carlson and Tim Scott would have you believe that CRT teaches that “America is a racist country” While that might be true, (and, IMO it is)…

CRT does not say that. It proposes that racism is “ordinary,” or “not remarkable”

For instance, everyone in the US does not carry the cold virus. But the reason that doctors don’t freak out when a patient has a cold is that they know having a cold is not remarkable. It is normal

3. Racism and white supremacy serve a purpose: Racism exists because a certain segment of society benefits from its existence. And because it serves a purpose, white people don’t really have an incentive to get rid of it…EVEN IF THEY DON’T AGREE WITH IT.

For instance, if you are in a boardroom or at Thanksgiving dinner and heard someone do or say something racist, you might think it’s despicable. But if you like your job, your position or simply didn’t want to upset your aunt Becky, you might not say anything.

4. Race is a social construct: Now, here is where I have a slight (not major) disagreement. I would argue (and I have taught) that race is an ECONOMIC construct (and I’m not just talking about money. I’m talking about supply, demand and the material manifestation of resources)

5. The interpretation and socialization of races evolve. Irish and italians were once not considered to be “white people.” To keep a white majority, Hispanic people may soon be considered “white.” Also, what is Hispanic, anyway? How are Dominicans “Hispanic” but Haitians “Black”?

How are Mexicans “Hispanic” but Pueblo Indians considered “Native American” just because they are separated by a river? I don’t know either

Now, CRT was MOSTLY used to examine the law. For instance, to understand why enslaved Black people were counted as 3/5ths of a person in the constitution, you could point to the fact that there were more slaves in the South. You could look at congressional representation, or…

You could say: “Oh yeah, there were only white men in the room when they agreed to include that in the Constitution.”

And one of the things that critical race theory says is that the idea of race-neutral “colorblindness” actually invigorates white supremacy.

Well, if white supremacy exists, and it is normal, and it benefits white people, then pretending as it doesn’t exist, failing to eradicate it, or acting as if it ISN’T normal not only allows white supremacy to flourish, it FURTHER NORMALIZES it.

Take Plessy v. Ferguson for instance. For years, the US acted as if it was possible for public accommodations to be “separate but equal” because, the south believed in the idea of race, thought that separating races was “ordinary” and that policy benefitted white people.

Until Brown v. Board said “separate cannot be equal,” white supremacy was so ordinary that we are STILL trying to undo its ordinariness.

This is a VERY VERY simplified explanation, but ask yourself this:

DO YOU THINK SOMEONE IS TEACHING THIS CONCEPT IN ELEMENTARY SCHOOL?

What may be true is that there are people who learned CRT and looked at the way history is taught and said:

“These books are filled with lies. They pretend to be colorblind but they don’t include a true perspective of history.”

Now you can disagree but ask yourself:

1. If it did not benefit white people, would the most powerful white men in the country fight so hard to preserve it?

2. If racism and white supremacy weren’t “ordinary” then why do so many white people disagree with CRT while MOST Black people think it’s important? 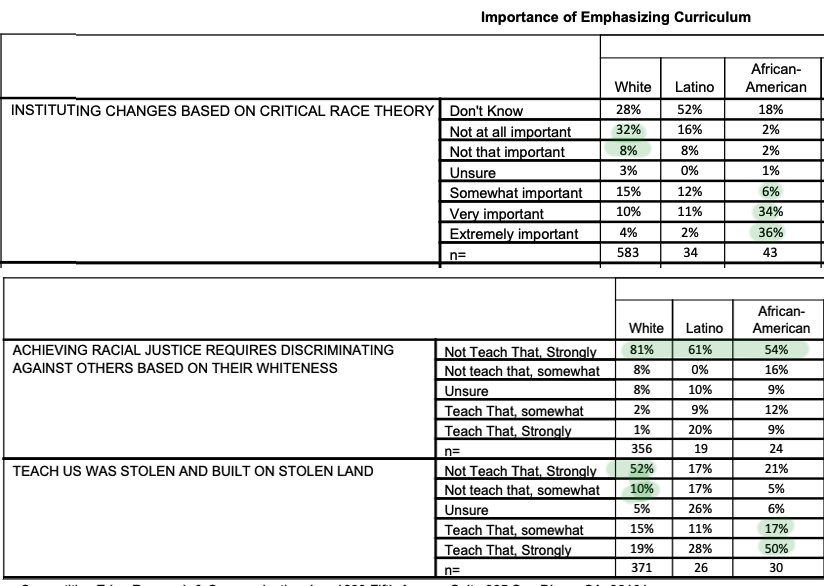 The debate surrounding @Ilhan and @ryangrim is not about this or that historical event. It's about whether the US deserves special status as an obviously distinct and morally superior force. And you cannot sustain that position with evidence. It is an article of nationalist faith